The Opportunity in Africa 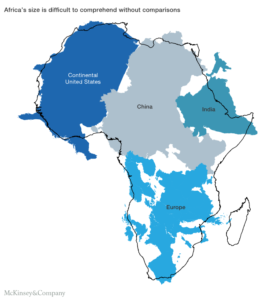 Africa is often misunderstood. Global business leaders who operate with outdated perceptions of the continent run the risk of missing out on one of the 21st century’s great growth opportunities. Let’s test your own perceptions: How many companies in Africa earn annual revenues of $1 billion or more? Take a guess.

If you guessed fewer than 50 such firms, you’re in good company. We surveyed over a thousand business executives across Africa and the world, and 50 was the maximum number chosen by most respondents. Several said “zero.” When we asked the same question at events such as the World Economic Forum, participants were only slightly more optimistic: most put the number of billion-dollar firms at between 50 and 100. The reality? There are 400 such companies—and they are on average both faster growing and more profitable than their global peers.

What’s driving this success? A confluence of factors is transforming Africa, including a rapid rise in mobile phone ownership and internet usage, increasing urbanization, a young and dynamic population, and favorable demographics (the working-age population is projected to grow by 2 percent a year through 2035). These trends are creating a new class of consumers with significant buying power—and they are increasingly plugged into global value chains. Indeed, our research shows that African firms are far more integrated into global trade than commonly perceived: One-third of respondents say they export to other continents, and almost half say they import from other continents.

Africa is an opportunity that cannot be ignored. Business leaders who operate with outdated perceptions of the continent run the risk of missing out on one of the 21st century’s great growth opportunities. With a rapidly growing population and economy, Africa is an untapped market with immense potential. Those who understand this potential will be well positioned to capitalize on it.

You can find out more about which cookies we are using or switch them off in settings.

This website uses cookies so that we can provide you with the best user experience possible. Cookie information is stored in your browser and performs functions such as recognising you when you return to our website and helping our team to understand which sections of the website you find most interesting and useful.

Strictly Necessary Cookie should be enabled at all times so that we can save your preferences for cookie settings.

If you disable this cookie, we will not be able to save your preferences. This means that every time you visit this website you will need to enable or disable cookies again.