A recent study has found that Berlin’s productivity gap is largely due to the city’s younger and more educated population. The study, conducted by the Berlin Institute for Population and Development, looked at a variety of factors that contribute to a region’s success. They found that two factors have the biggest effect on a region’s success: the younger and more educated its population, the higher the productivity. Other factors, such as population density and proximity to other economically dynamic regions, proved far less important. 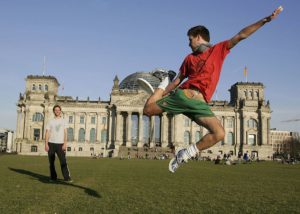 The Importance of Education

The researchers found that the most important factor in a region’s productivity is the education level of its population. This is not surprising, as an educated workforce is better able to adapt to changes and find new ways to increase productivity. In addition, an educated workforce is more likely to be innovative and create new products or services that can drive economic growth. For these reasons, it is essential for businesses in Berlin to invest in their employees’ education. By providing employees with opportunities to learn new skills and stay up-to-date on industry trends, businesses can ensure that they are getting the most out of their workforce.

Proximity to Other Dynamic Regions

The final factor that the researchers looked at was proximity to other economically dynamic regions. They found that this factor had very little impact on a region’s productivity. This means that businesses in Berlin can locate themselves anywhere in the city and still benefit from being close to other successful regions. This is good news for businesses looking for office space in Berlin, as they have many options available to them.

The Berlin Institute for Population and Development’s study provides valuable insights into what factors contribute to a region’s success. The most important factor is the education level of its population. However, businesses in Berlin should also consider moving to areas with a higher population density in order to benefit from increased competition and innovation.

You can find out more about which cookies we are using or switch them off in settings.

This website uses cookies so that we can provide you with the best user experience possible. Cookie information is stored in your browser and performs functions such as recognising you when you return to our website and helping our team to understand which sections of the website you find most interesting and useful.

Strictly Necessary Cookie should be enabled at all times so that we can save your preferences for cookie settings.

If you disable this cookie, we will not be able to save your preferences. This means that every time you visit this website you will need to enable or disable cookies again.